Master Class captivates the next generation of scientists

CERN, DKFZ Heidelberg and GSI Darmstadt engage the next generation of scientists through a hands-on experience on particle therapy. 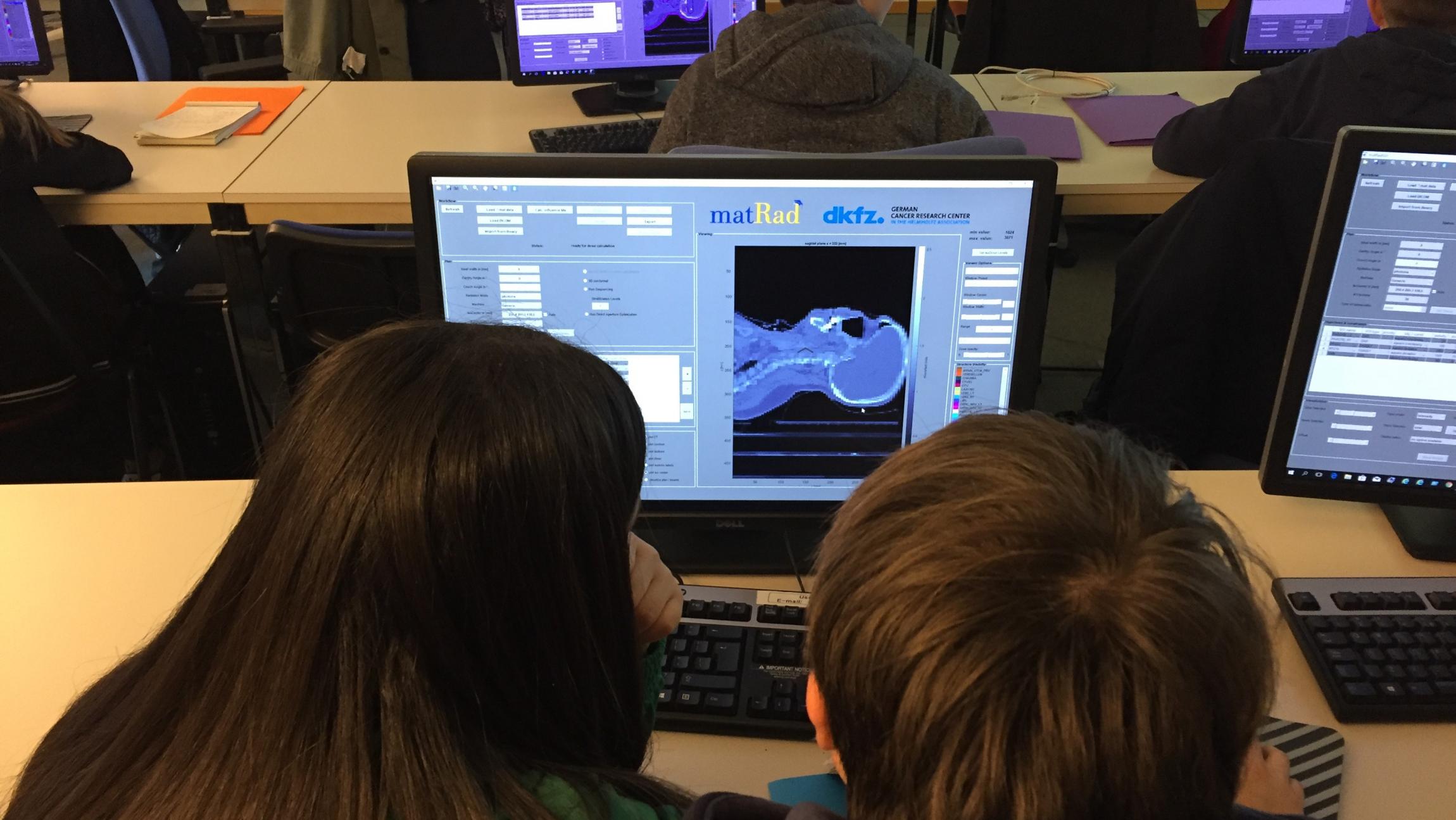 Students exploring the matRad software during the hands-on session of the masterclass. (Image: CERN)

The increasing use of accelerators for industry and medical applications has led to an increasing demand of highly trained researchers and engineers, as well support to the investment on research and development. To motivate the young generation and highlight the benefits from fundamental research in society, a new masterclass on particle therapy was developed. This new package, demonstrating an important application of accelerators for health, has been proposed to enrich the programme of the well-established International Physics Master Classes (IMC), an educational outreach activity and flagship project of IPPOG, the International Particle Physics Outreach Group. In 2019, this program reached out to about 15,000 students from 225 institutes of 55 participant countries.

The first pilot session of the new Particle Therapy Master Class (PTMC) took place on 5 April 2019 with the participation of CERN, DKFZ Heidelberg and GSI Darmstadt. High-school students were invited to each of the institutes for a full day programme, following the same agenda.  At the end of the day, they shared their experience in a common videoconference.

At CERN, over 30 students from neighbouring French and Swiss schools, age 12 to 17, participated in the masterclass, supported by the ARIES outreach activities. The morning session was dedicated to introductory lectures, highlighting knowledge transfer and the impact of CERN’s expertise in the development of the open source design study of particle therapy facilities (PIMMS). It also included particle therapy animations developed within the ENLIGHT framework. Participants had the opportunity to visit the Antiproton Decelerator and learn about antimatter and its application in PET scanners.

After lunch, the hands-on Particle Therapy Master Class session allowed students to get a realistic experience of the technics employed by researchers for tumorous cancer treatment, using x-rays, protons or carbon ions, as in particle therapy centres. The professional research software toolkit used in this masterclass was matRad, developed by the German Cancer Research Centre DKFZ in Heidelberg. The event concluded with a common videoconference, where students discussed their results with colleagues at the other participating institutes, as international scientific collaborations do.

The event was greatly enjoyed by all participants, students and tutors alike. Students showed a lot of interest and enthusiasm during the discussion of results through the videoconference, which demonstrated their understanding of the presented topics. The local organizers from all three institutes expressed their deep satisfaction, motivation, and commitment to continue and improve the initiative, with the aim of engaging the next generation of scientists and strengthening the bonds among the colleagues involved in the project. The new Particle Therapy Master Class is going to be included into the International Physics Master Class 2020 schedule, following its approval by its steering group, during the spring IPPOG meeting on 23-25 May 2019 at GSI-FAIR.

The institutes involved in this pilot project are leading institutes in fundamental research, but also renown for important contributions in the field of medical applications. The students were informed about these institutes’ role in the development of existing particle therapy centres in Europe. It was only natural to hear their question of “what next” for this field of research. Indeed, the wish of the large research community is to contribute further towards next-generation facilities for cancer therapy, building on past experience, as a tangible  benefit of fundamental research in society. At CERN, a new project, NIMMS (Next Ion Medical Machine Study), starts now exploring novel accelerator technics, as a response to the requirements for improved therapy facilities.

The successful pilot session of the Particle Therapy Master Class has set the foundation and several other institutes have already declared interest to join the project. Ultimately, this experience could have an impact on the young students and their career choices, while preparing them to support scientific research and value scientific, factual decision-making methods, as future citizens and ambassadors of the impact of science in society.

In addition to its impact in the framework of the International Physics Master Class, the potential of the new Particle Physics Master Class can be explored and applied in many ways. It has the potential to enhance public awareness of accelerators’ applications, trigger the interest of the next generation of scientists, promote education and training in related fields, and to demonstrate the impact of international science collaboration.

A report from the Heavy Ion Therapy Mastercla...