Unfolding the full potential of a future circular lepton collider

A recently proposed acceleration scheme could further increase the performance of a technology-ready circular lepton collider and boost the exploratory potential of the FCC integrated programme. 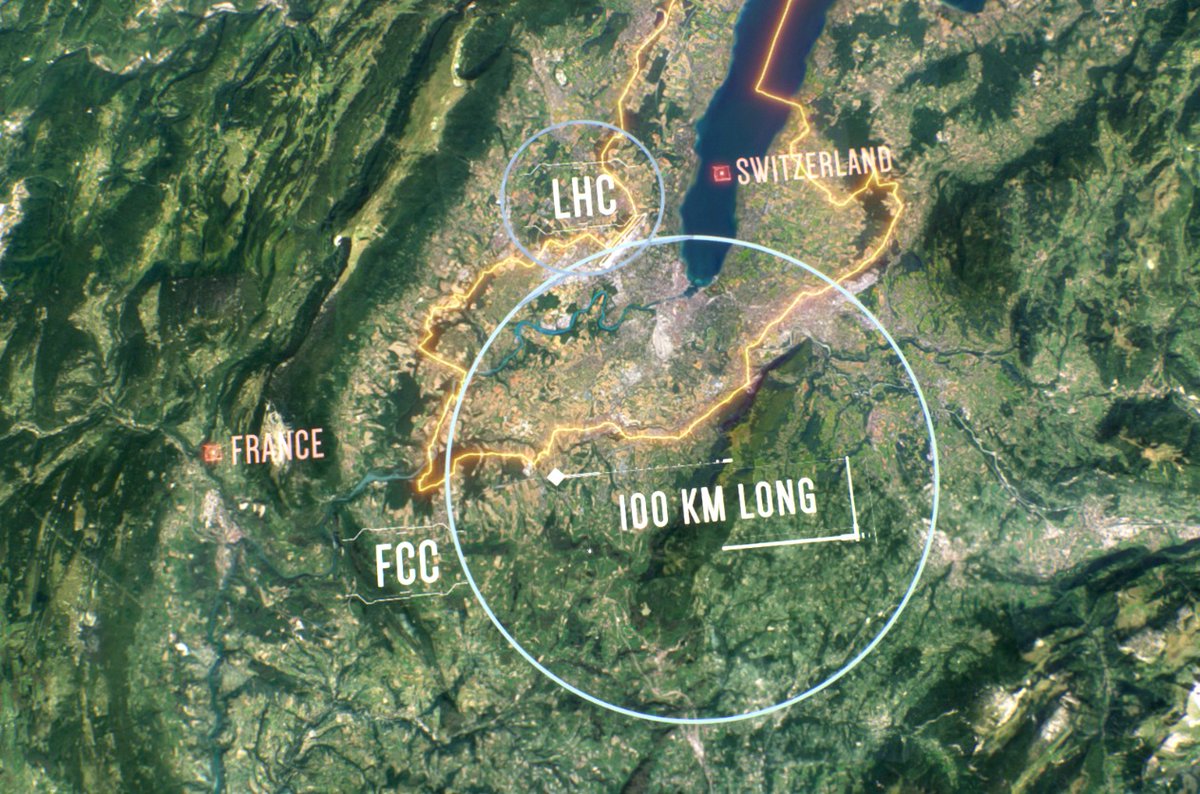 A next-generation lepton collider should offer an attractive physics programme, including a detailed study of the Higgs boson and ushering in a new era of high-precision studies in the electroweak sector, along with numerous possibilities to unveil new physics beyond the framework of the Standard Model.

After many earlier design studies for linear machines (VLEPP, TESLA, NLC, JLC, GLC, and more recently ILC and CLIC), in 2018, the Future Circular Collider (FCC) collaboration submitted the Conceptual Design Report (FCC CDR, Vol.II) for a circular lepton collider (FCC-ee) spanning the energy range from the Z pole (90 GeV) up to the top quark production threshold (365 GeV), promising extremely high luminosities at multiple interaction points. The FCC-ee design profits from new concepts, like beam operation with strong radiation damping, double rings, and a crab-waist collision scheme, which were demonstrated at other past, recent and present colliders - notably at LEP, the B-factories, and DAFNE - and from technological advances such as superconducting radiofrequency cavities based on thin-film technology or energy-efficient twin-aperture magnets. These and other innovations paved the way towards extremely high luminosities at future circular lepton colliders.

The FCC-ee, housed in a new 100 km circumference tunnel, offers two interaction points – upgradeable to four – and thus deliver twice (or consequently four times) as much luminosity as a single interaction point which is another substantial advantage when precision is the name of the game. In fact, the FCC-ee luminosity could be five orders of magnitude higher than LEP, thus enabling ultraprecise tests of the Standard Model and extremely sensitive searches for rare processes.

FCC-ee could run at different energies, as an electroweak, flavour, Higgs and top factory, respectively. The 15-year operation programme of the FCC-ee aims at covering the full energy regime from the Z pole over the WW threshold, and the energy of maximum Higgs production rate up to the top quark threshold. This approach allows high precision studies of the Z and W bosons, and offers a smooth profile for the machine evolution to harness the most important physics opportunities. For example, the FCC-ee’s high-precision measurements of the Higgs boson could be combined with HL-LHC results, removing many of the model dependencies. According to the baseline design, FCC-ee delivers to each of its two interaction points - at a centre-of-mass energy of 240 GeV where the Higgs-boson production rate is maximum -- a luminosity more than ten times larger compared to linear colliders thus allowing to collect at least an order of magnitude more Higgs bosons per year. Another advantage of a circular collider like FCC-ee is the accurate beam calibration offered thanks to the availability of transverse polarisation expected at a beam energy of 80 GeV or higher allowing energy calibration at the 100 keV level; a unique feature in a precision physics programme. The experimental accuracy offered by FCC-ee allows detecting very rare processes and tiny violations in the measured quantities of the electroweak key observables.

FCC-ee design is based throughout on energy-efficient technology such as thin-film superconducting radiofrequency cavities (RF), efficient radiofrquency power sources, and twin-aperture arc magnets. As a consequence, over its full energy range  (from 90 to 385 GeV c.m.) FCC-ee offers an extremely high energy-to-luminosity efficiency at low energy consumption as demonstrated also in the following figure of merit from the EPPSU Physics Briefing Book.

Despite the significant progress of the past years, circular lepton colliders still struggle to reach even higher centre-of-mass energies, e.g. in excess of 400 or 500 GeV, due to limitations from synchrotron radiation that, at constant beam current, rapidly increases with energy. In a recent preprint, Vladimir Litvinenko (Stony Brook), Thomas Roser and Maria Chamizo-Llatas (Brookhaven National Laboratory) suggest the use of a novel approach that could potentially provide an attractive upgrade path for a future circular lepton collider towards even higher energies or luminosities.

The proposed acceleration scheme is based on the use of Energy Recovery Linacs (ERLs) that could reduce the total energy loss from synchrotron radiation, and especially the beam emittance at the collision point, and consequently extend the centre-of-mass energy reach of a future circular collider while still allowing for extremely high luminosities and reducing overall power consumption. In the case of FCC-ee this approach, if successfully demonstrated, could potentially extend its energy reach up to 600 GeV.

The concept of the ERL was first proposed in 1965 by Maury Tigner, as a key ingredient of a linear electron-positron collider. In recent years, ERLs have been considered as important drivers both for future light sources. The basic idea is to accelerate a high-power electron beam, without spending too much on radiofrequency (RF) power generation, by recovering the spent-beam energy after the collision. More specifically, an electron beam from the injector is accelerated through a time-varying RF field stored in superconducting linear accelerators. The two beams after the interaction are injected at opposite phase into the accelerating structures for deceleration. During this stage, the beams lose their energy, that is converted back into RF field energy, and can be reused to accelerate the succeeding electron bunches. In addition to an excellent conversion efficiency from electric power to electron beam power, ERLs also allow for higher-brightness beams of electrons and positrons at the collision point.

About 20 years ago, the ERL concept was first demonstrated at Jefferson Lab in the US and, a few years later, by ALICE at Daresbury Laboratory in the UK. Presently a team at the Cornell–Brookhaven ERL Test Accelerator (CBETA) facility is attempting to demonstrate a four-turn ERL based on single large-aperture fixed-field alternating-gradient magnets, thus fueling the discussion about the feasibility of such a cost-saving technique for a future circular lepton collider.

In their paper, Litvinenko, Roser and Chamizo-Llatas suggest the installation of the ERLs in the FCC tunnel; a natural extension of an earlier idea developed for an ERL-based electron-ion collider at Brookhaven National Laboratory (eRHIC). The use of ERLs in the FCC-ee could indeed offer significant advantages for exploring the regime up to 600 GeV compared to linear colliders, as it offers much higher luminosities, while reducing the power consumption. In particular, the ERL approach also allows maintaining an ultra-low beam emittance at high energy. As a consequence, the use of ERLs for a potential energy upgrade of FCC-ee will allow for much relaxed optics parameters at the collision point, compared to current requirements for linear machines. On the other hand, at lower energy, e.g. on the Z pole or at the WW threshold, the ERL might not offer any advantage compared with the FCC-ee baseline. Here, instead, the FCC-ee storage-ring collider enables an extremely precise beam energy calibration, as discussed before, which would no longer be available for the ERL mode of operation.

According to the authors of the Stony-Brook/Brookhaven paper, their suggested scheme could allow for a low electric power consumption even at the highest energies considered. Thereby, their approach is much in line with the emphasis that the FCC-ee study has placed on delivering a “green” collider by boosting the efficiency of the key collider components, documented in the FCC-ee CDR.

ERLs could find numerous applications in other particle physics accelerators, like the suggested FCC-eh proposal for an electron-positron interaction region for detailed PDF measurements, in future light sources with high average brilliance, as well as in industry. To understand the actual gain and the limitations of the new scheme, further research is needed. This would include advanced cavity-design concepts, surface treatments, higher-order-mode damping, and emittance preserving optics, along with beam diagnostics for multiple passes and with a high dynamic range.

Today, ERLs remain a topic of great worldwide interest with efforts presently underway at Cornell, Jefferson Lab, KEK, Mainz, and Orsay. However, significant further research appears needed to demonstrate the overall feasibility of this concept with the proposed parameters, and to quantify the financial burden implied, before the ERL option can be considered a realistic upgrade path for the FCC-ee.

A better understanding of the achievable ERL beam parameters could render the proposed scheme an attractive option for a future upgrade of the FCC-ee either to achieve much higher luminosity at the top quark pair-production threshold or to extend the FCC-ee operation to 500 GeV c.m and beyond. The ERL approach could further boost the versatility of the post-LHC research infrastructure proposed by the FCC collaboration adding to the physics opportunities offered by the integrated FCC programme.

Ground-breaking method to lift limitation on ...