In order to reduce the beam emittance by a large factor, the CLIC Collaboration has developed an innovative dipole magnet prototype and built a permanent magnet demonstrator 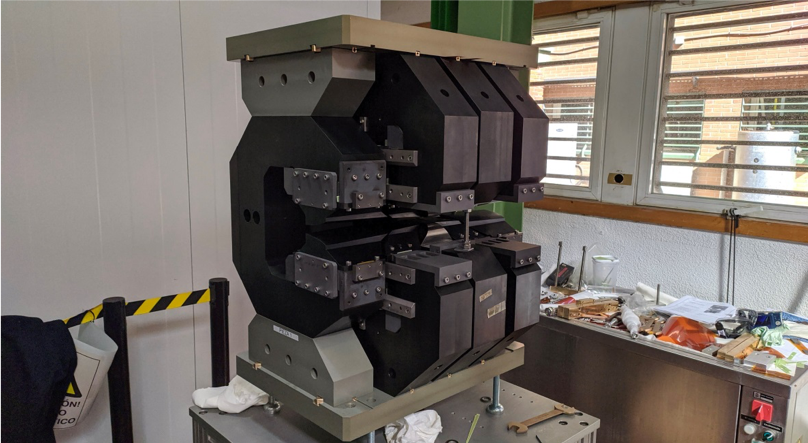 The performance of synchrotrons used as light sources, damping rings (DRs) or e+/e- colliders depends heavily in the minimisation of the beam size, and thereby the beam emittance, a statistical quantity describing the area occupied by the beam in phase space. Up until now, low emittance was achieved by adjusting the magnets’ arrangement, strength and characteristics. A new design paradigm has been developed by the CLIC Collaboration to further reduce the horizontal emittance by a factor of 2 and reduce ring circumference by 20%. As part of the Collaboration, the first demonstrator of this permanent magnet concept was constructed by CIEMAT in 2021 and measured in 2022.

In planar rings dominated by synchrotron radiation emission, its vertical component depends on the control of magnet and alignment errors and their correction with beam-based methods. The horizontal emittance though strictly depends on the arrangement and strength of magnets of the lattice cell (i.e. the beam optics) and the characteristics of the bending magnets, including their number. The optimal lattice configurations for achieving the absolute minimum horizontal emittance are the theoretical minimum emittance (TME) cells, which is the building block of the multi-bend achromat (MBA) cells, employed in modern low emittance rings. An example is the ESRF-EBS storage ring upgrade, where the horizontal emittance reached 130 pm. In order to further reduce the emittance by a large factor, a new design paradigm is required. By using dipoles whose magnetic field varies longitudinally, the horizontal emittance can be further minimised, as was demonstrated for the design of the Compact Linear Collider (CLIC) DRs. In that case, the margin gained in the emittance reduction enabled the removal of a number of TME arc cells, while still keeping the strict emittance requirements of the collider, (i.e. horizontal emittance of around 60 pm).

The optimal dipole field evolution for reaching a low horizontal emittance, was found analytically and then verified numerically (see Fig.1). In particular, it was demonstrated that a hyperbolic field profile (i.e. with a bending radius evolving in a trapezoidal shape), reaching the highest possible field at the centre of the dipole can reduce in principle the theoretical emittance minimum by one order of magnitude. The dipole with this optimal field variation was further refined taking into account technological limitations for the magnet fabrication and a solid magnetic design was conducted by CIEMAT, using permanent magnet enhancers (SmCo at the low field and NdFeB at the high-field section), in order to reach an unprecedented field of 2.3 T, within a few cm of the magnet’s centre. In addition, and using again a hyperbolic pole-tip, a horizontally defocusing quadrupole gradient of 11 T/m was included, which improves the ability to optically match the cell. An added value of this design approach is not only the reduction of the overall cost, scaled by the ring circumference but also of the power consumption, by an equivalent amount of around 20%.

This magnet prototype was recently assembled and measured with very good results, in particular with respect to field quality. A spin-off of this design approach is being applied for the upgrade of the ELETTRA light source in order to reduce the horizontal emittance beyond the 210 pm proposed for the 2.4 GeV ring of the  ELETTRA 2.0 study and financed by the I.FAST EU project. The study includes the necessary optics calculations for the ELETTRA MBA cell, by replacing all the dipoles with longitudinally varying ones, with an optimised hyperbolic field profile. The specifications of the magnets will be then used for the magnetic and mechanical design, based on the experience already gained by CIEMAT. Thereby, a solid basis for the fabrication of the magnet prototype will be established and the manufacturing will be conducted by KYMA, a leading industrial partner in the development of magnet technologies for X-ray sources and, in particular, insertion devices. The prototyping procedure and acceptance tests will shape the industrialisation procedure towards a series fabrication of such an innovative magnet device and its full inclusion to future upgrades of ring-based synchrotron light sources.

I.FAST under the spotlights at IPAC’22