Bringing Superconducting Power Transmission for HL-LHC from concept to reality

Nb-Ti, MgB2 and ReBCO: a combination of conventional and novel superconductors for the powering of the HL-LHC magnets. Demo 2 and Demo 3 demonstration systems were successfully qualified at CERN in 2020. 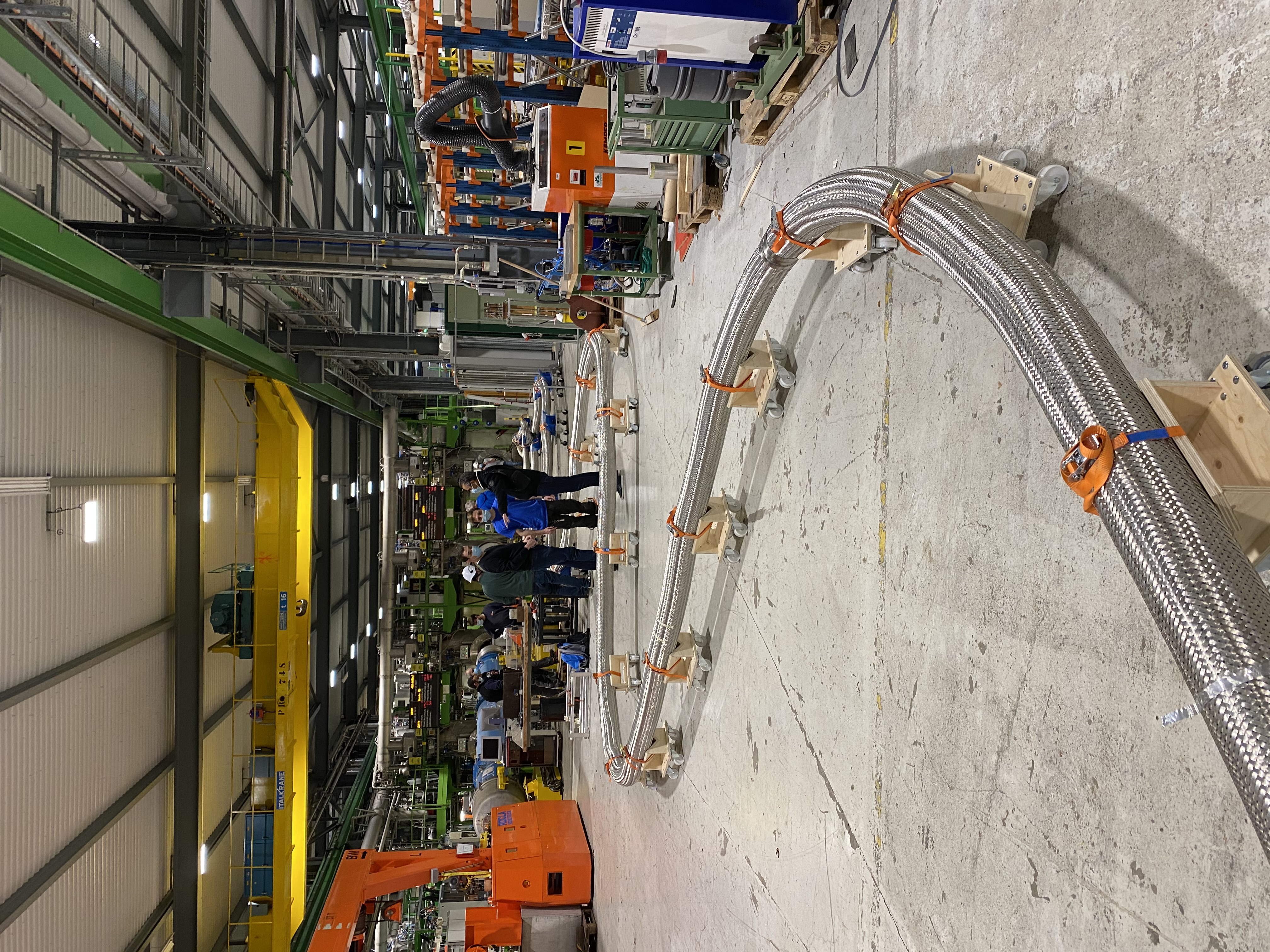 Demo 3 and Demo 2 each consist of a 62.5 m power transmission line made from a flexible, double-wall, corrugated cryostat, together with complex, final size MgB2 cable assemblies. There are up to nineteen cables in a single assembly, twisted together to form a compact bundle. The electrical insulation of each cable was tested at up to 15 kA in air. Each pair of cable will feed a different HL-LHC magnet circuit. The cables are cooled by an optimized forced-flow of helium gas generated and controlled within the system.

The MgB2 lines transferred record DC currents of up to about |120| kA (Demo 2) and |75| kA (Demo 3) at temperatures of up to 31 K. Each cold powering system included terminations of the type that will be used for HL-LHC: at one side, Nb-Ti cables – connected to MgB2 in a 4.5 K saturated liquid helium bath and, at the other side the ReBCO High Temperature Superconducting (HTS) part of the current leads, connected to MgB2 in a helium gas environment nominally at 20 K. The HTS ReBCO was operated at up to 65 K.

Tests validated the current capability in nominal conditions and operation in transient modes, i.e. fast electrical discharges and combined powering of the various cables, according to different electrical scenarios; thermo-mechanical behaviour of the cold powering systems during cool-down and warm-up; feasibility of high-current low-resistance splices between MgB2 to ReBCO and MgB2 to Nb-Ti; global cryogenic and electrical performance; and novel ReBCO based HTS current leads. Handling, spooling and routing of the power transmission lines were also performed successfully for the first time.

While 2020 completed around a decade of R&D on MgB2 power transmission lines, 2021 started with the delivery of the first full-size series |120| kA MgB2 cable assembly for the HL-LHC Triplets. The cable was successfully assembled and tested at voltages of up to 15 kV in industry before being delivered to CERN spooled onto a large drum. In the meantime, 1150 kilometers of MgB2 wire were produced by an industrial company and delivered to CERN. This is the total needed for the HL-LHC cold powering systems, and it represents the first large-scale industrial production of MgB2 conductor.

For now, construction of all other series components of the HL-LHC cold powering systems has been launched and all is on track for assembling and testing the first full-scale series system at CERN, the type needed for the powering of the HL-LHC Triplets in early 2022.