Reverse coating: a new method for the production of seamless copper cavities

Inspired by the production of NEG-coated vacuum chambers, this novel technique for high quality Nb/Cu cavities that can be used in FCC-ee has completed its first qualitative feasibility study. 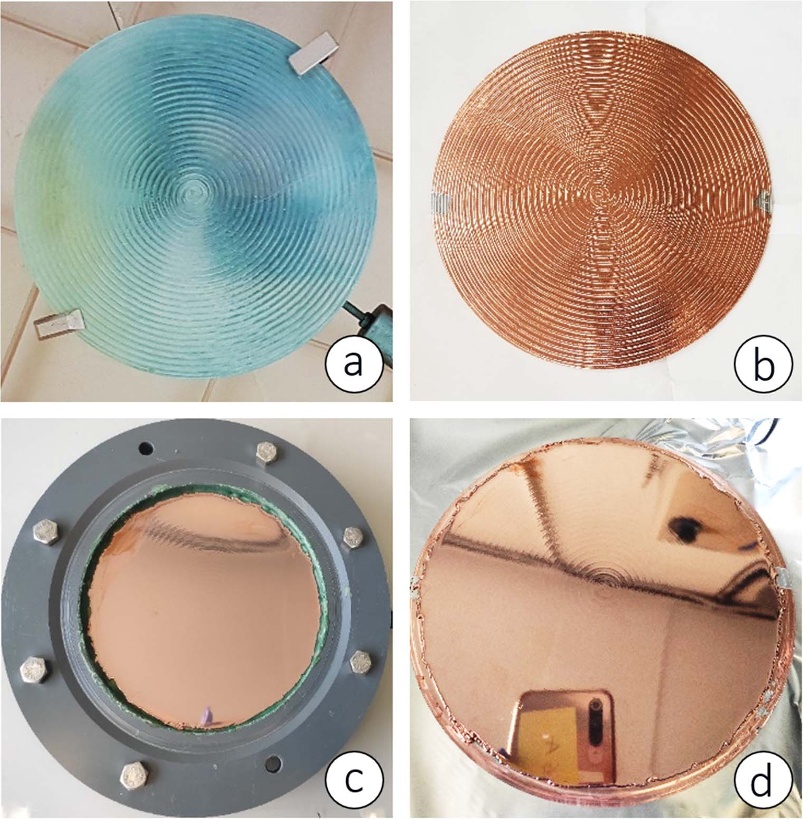 For the realisation of the Future Circular Collider (FCC), in particular of its first stage as lepton collider, known as FCC-ee, a system of superconducting radio-frequency (RF) cavities based on the niobium-coated copper technology is foreseen to provide the accelerating fields needed for the operation in the Z, W and Higgs boson physics phases. The Nb/Cu technology, already well established since the Large Electron Positron-II era and still in use at CERN for the Large Hadron Collider (LHC) and the HIE-ISOLDE accelerator, consists in the deposition of a niobium thin-film onto the inner walls of a copper cavity, and has proven successful, with respect to the employment of bulk niobium cavities, under several aspects, among which are the mitigation of the material costs and the improvement of the cavity’s thermal stability. However, contrarily to what observed in bulk niobium resonators, niobium-copper cavities exhibit a degradation of the quality factor with increasing accelerating field, issue known as the “Q-slope”.

Advances in the R&D have nevertheless made it possible to mitigate the slope of the LHC cavities to provide the 5 MV/m accelerating field needed for its operation, with recent cavities displaying a much larger usable gradient. For the FCC-ee, this value will have to be pushed to 10 to 20 MV/m. Building on the experience gathered in the past years, many factors are nowadays identified to have an impact on the Q-slope, one of these being the presence of irregularities, such as seams or welds, on the copper structure. One of the natural solutions to this aspect is identified into the fabrication of seamless copper cavities.

To this aim a new concept, the “reverse-coating method”, inspired by the production of NEG-coated vacuum chambers [2], proposes a fabrication method for seamless copper cavities which already include the niobium film at the production stage. The method, schematically represented in Fig. 1, consists of the following main steps: (A) construction of a sacrificial aluminium mandrel which emulates the desired shape and size for the final cavity; (B) coating of the mandrel with a niobium film, representing the functional superconducting radio-frequency surface of the final cavity; (C) coating of a copper film, which serves as adhesion layer for the later electroplated copper structure; (D) electro-plating of the final copper cavity structure on the copper film; (E) removal of the aluminium mandrel via chemical etching.

The first qualitative study to assess the feasibility of the concept has been completed [1]: the steps described above were reproduced for a simpler structure than a resonant cavity, i. e. a flat aluminium disk, and delivered satisfying results. The study demonstrated the need to protect the niobium film from the process of chemical etching of the mandrel, as a degradation of the critical temperature of the niobium film, validated by the scanning electron microscope (SEM) scans of the film surface, was observed. This issue was tackled by adding a copper protective layer between the aluminium mandrel and the niobium film, in order to prevent the etching process of the mandrel from affecting the purity and the integrity of the niobium film. This copper protective film was hence deposited prior to the deposition of the niobium, that is in between steps A and B. By taking this precaution, it was possible to perform the removal of both the mandrel and the protective layer without affecting the quality of the niobium film. The results of the characterisation performed on the obtained samples are shown in Fig. 2. The niobium film exhibited a sharp superconducting to normal conducting phase transition (graph on the left) with a critical temperature of 9.3 K, a dense, void-free morphology (insert on the left) confirmed by the SEM imaging of the focused ion beam (FIB) milled cross section, and a critical current (graph on the right) of 0.16 MA/mm2 at 4 K and 0.2 T, also indication of a low amount of structural defects.

In conclusion, this study demonstrated that the proposed method is capable of delivering niobium films reverse-coated on a copper seamless substrate which exhibit satisfying morphology and superconducting properties. Two advantages are to be underlined about the reverse coating technique with respect to standard fabrication methods: not only it has good potential for the production of seamless cavities, but also removes the otherwise mandatory substrate surface preparation chemistry (chemical polishing, electropolishing), from which the quality of the film can depend strongly. The only major chemical treatment involved in the reverse-coating method is represented by the chemical dissolution of the aluminium mandrel with mostly harmless chemicals, which has the advantage of not affecting the copper substrate and therefore the copper-niobium interface. The next step in the feasibility study is planned to be the assessment of the RF performance of the niobium functional layer by directly manufacturing a real scale 1.3 GHz superconducting RF cavity.