As part of the FCC Feasibility Study, design works of vacuum components is being carried out now and will soon reach the prototyping phase. 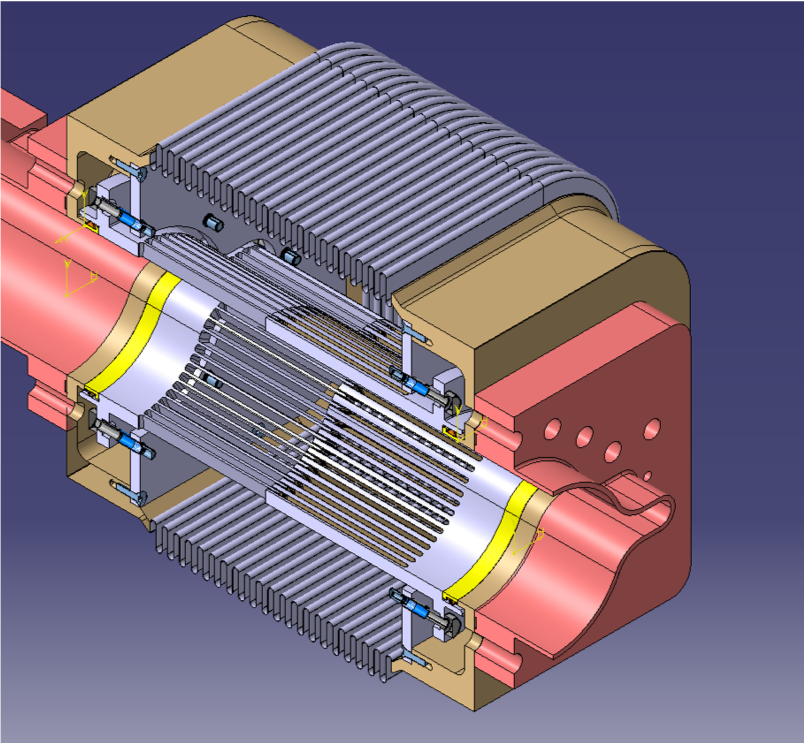 One of the main challenges for circular particle colliders is the copious amounts of synchrotron radiation (SR) emitted by the charged particles as they travel in curved paths. Synchrotron radiation is of major importance in the design of electron accelerators as they are sources of copious amounts SR compared to proton machines. The reason is the dependence of the amount of emitted SR on the inverse fourth power of the particle’s mass (~ 1/m4) and given the fact that electrons are about 1836 times lighter than protons.

The presence of SR, directly affects the vacuum in the beam pipes/in the accelerator via the photon-stimulated desorption mechanism (PSD). In the presence of SR, the internal wall of the vacuum chamber starts giving off molecules. At the start up of a new machine, the PSD coefficient η can be as high as 0.1 molecules/ph, depending on the material of the chamber and its surface treatments. Past lepton accelerators have shown that when η=10-6 molecules/ph the corresponding vacuum lifetime is of the order of tens of hours and it becomes longer than that of other lifetime-limiting processes (e.g. Touschek lifetime). Historically such low value of η is reached after few hundred ampere-hours of integrated beam dose (the integral of the beam current multiplied by time, a typical figure of merit to compare machines to one another), but for machines with very large bending radius, such as the proposed Future Circular Collider (FCC), it may take longer.

This is due to the fact that in the PSD mechanism, the fundamental figure of merit for vacuum, is a function of the integral of the linear photon flux density which is lower for machines with small bending radius.

For comparison, existing light sources with beam energies of 2-8 GeV have bending radiuses of 5-40 m, while FCC-ee would have a bending radius of 10.8 km.

The above, show some of the challenges, informing the design of the FCC-ee vacuum system in order to cope with the different conditions between the centre-of-mass energy runs from the Z boson (90 GeV) up to the top quark threshold (365 GeV).

The initial Z-pole machine will need to be conditioned and brought to design parameters as quickly as possible, given the rather short time allotted to it in the scientific program of FCC-ee, before ramping up the energy to 80, 120, and 182.5 GeV later. The FCC Physics programme foresees, commissioning and running at the Z-pole with an integrated luminosity of 150 ab-1 in just 4 years, a very challenging feat. (Ref. Fig.3 of “FCC-ee: The Lepton Collider”, https://doi.org/10.1140/epjst/e2019-900045-4)

Today, the highest bending magnet critical energy for existing electron accelerators is that of the 8 GeV SPring-8 light source in Japan, with 28.9 keV. The FCC-ee SR spectrum, varies a lot, from 19.5 keV for the Z-pole up to 1.25 MeV for the ttbar at 182.5 GeV. Moreover, the SC spectrum has a critical energy above 100 keV already for the 80 GeV W-pole run: in these photon energies the Compton component starts being preponderant, meaning that the SR fan will generate a copious number of secondaries particles via the Compton effect. Therefore, the FCC-ee vacuum design is carried out in conjunction with the CERN FLUKA team, trying to minimise the impact on tunnel and machine components in terms of energy deposition and activation due to high critical energy SR fans.

Given the very large size of the FCC-ee, and the need for two rings, a cost-saving vacuum system solution, in particular for pumping, must be found: several options have been analysed during the past five years, and the most cost-effective seems to be the one implementing NEG-coatings, copper material for the chambers, and a cross-section of the chambers resembling the one developed for the SUPERKEKB collider.

Design of components such as RF contact fingers with bellows, SR absorbers to concentrate the main source of PSD in areas near pumps, novel compact sealing technology based on shape-memory alloys, and innovative technologies for integration of beam-position monitors is being carried out now and will soon reach the prototyping phase. Also, NEG-coating techniques for depositing NEG thin films over chambers having lengths up to 12 m are under development, capitalising on innovation introduced for the HL-LHC amorphous carbon coating of the inner triplets.

The aim, as part of the FCC Feasibility Study, is to be able to build a representative section of the FCC-ee arcs and install dipole chambers inside models of all arc magnets. This will help determine the actual needed tools for timely installation of such long components in the future tunnel, another challenging issue. It will also help devise alignment techniques for such a big machine, considering that the full-energy injection booster will sit above the twin rings.

I.FAST Traineeship Programme - Apply by May 1...