A new concept of using THz radiation for electron acceleration 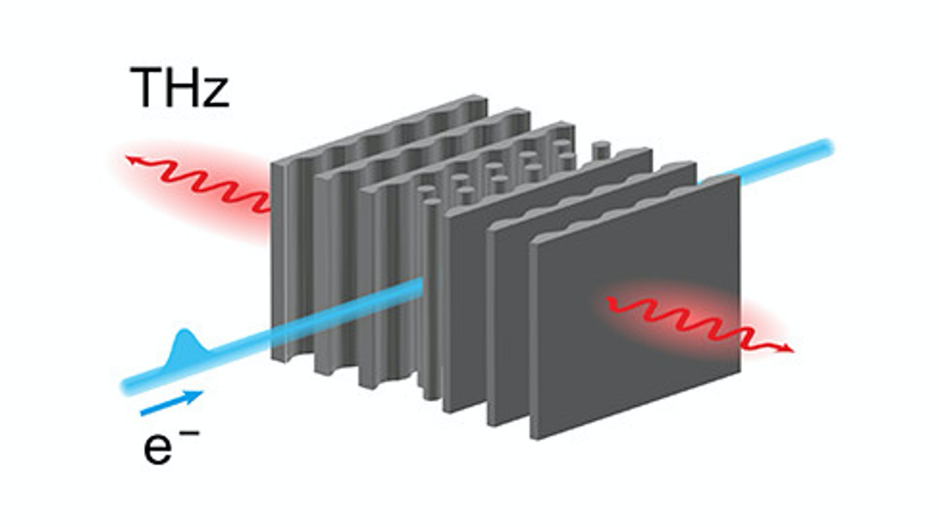 Terahertz radiation has a wavelength of 0.1 − 1mm and is situated in the electromagnetic spectrum between infrared (>3 THz) and microwaves (<0.3 THz). It has various applications in scientific and technological areas, including wireless communication, biomedical and material science, and electron acceleration. The most common technique to generate THz radiation uses laser pulses sent onto a nonlinear crystal, which results in broadband THz pulses by a process known as optical rectification. An alternative approach uses free electrons passed along a periodic structure, which emits synchronous radiation via the Smith-Purcell effect. The precise shape of the structure thereby determines the wavelength and spectral width of the emitted radiation.

In a paper recently published by B. Hermann, et al in ACS Photonics, the authors employed the technique of photonic inverse design to optimise a structure for Smith-Purcell radiation from ultra-relativistic electrons. The goal of the optimisation was the generation of narrowband THz radiation around a wavelength of 0.9 mm. They manufactured this structure using additive manufacturing on a stereolithography 3D printer and measured the spectrum of the radiation emitted when 3.2 GeV electron bunches from SwissFEL passed through the structure. Since these electron bunches are shorter than the Smith-Purcell wavelength, the radiation is emitted coherently and scales quadratically with the bunch charge.

At the heart of the inverse design algorithm lies the objective function, which quantifies the performance of a structure design. Here the authors measured the emitted radiation at the design wavelength to evaluate the performance of the structure. The algorithm then maximises this value by varying all possible structure parameters. The parameters can be thought of as the ∼ 10, 000 pixels which define a structure design, but more generally, they can also comprise design constraints, such as symmetry and feature size.

The researchers optimised a single unit cell of the grating with periodic boundaries in a 2D finite differences frequency-domain simulation. The design region excluded a 0.15-mm-broad vacuum channel in the middle to ensure that electrons can propagate freely through the structure. The resulting design (shown in Fig. 1b) exhibits distributed Bragg reflectors on each side of the electron channel, which enable resonant enhancement at the emission wavelength of 0.9 mm. It is this resonant enhancement which yields the desired narrowband emission spectrum.

The authors fabricated the inverse-designed structure in a stereolithography 3D printer, which is ideal for rapid prototyping. To this end, they chose a high-temperature polymer resin which fulfils all their requirements: First, it has a low absorption coefficient but high refractive index in the targeted THz range. And second, it needs to comply with the stringent vacuum requirements of the accelerator of SwissFEL. The fabricated structure with a periodicity of 0.9mm is shown in Fig. 1c.

To characterise the performance of the inverse-designed Smith-Purcell radiator, the researchers installed it inside the ACHIP vacuum chamber at SwissFEL and set up an interferometer with a Schottky diode as detector to measure the first-order autocorrelation.

The retrieved spectrum fits well to that of a finite-difference time-domain (FDTD) simulation, see Fig. 2. By scanning the charge of the electron bunch, a quadratic scaling of the emitted THz energy was observed, which demonstrates coherent enhancement.

The wavelength of coherent emission is defined by the periodicity of the structure. As the index of refraction depends only weakly on the frequency in the THz region, the structure can easily be adapted to generate different wavelengths by scaling, and manufacturing using suitable resins reaches sub-micrometre accuracy in commercially available 3D printers. The versatility of inverse design offers the possibility to optimise it for different photon and beam energies. This method could thus advance beam-based THz generation for a wide range of applications.

The THz pulse energy demonstrated in this study was relatively low but can be increased linearly with the collection efficiency and quadratically with the electron bunch charge.

This work was supported by the Gordon and Betty Moore Foundation through Grant GBMF4744 (ACHIP) to Stanford.

The research was published in ACS Photonics:

I.FAST under the spotlights at IPAC’22