Elegant yet complex, a prototype final focus quadrupole has been manufactured and has successfully passed its first tests. 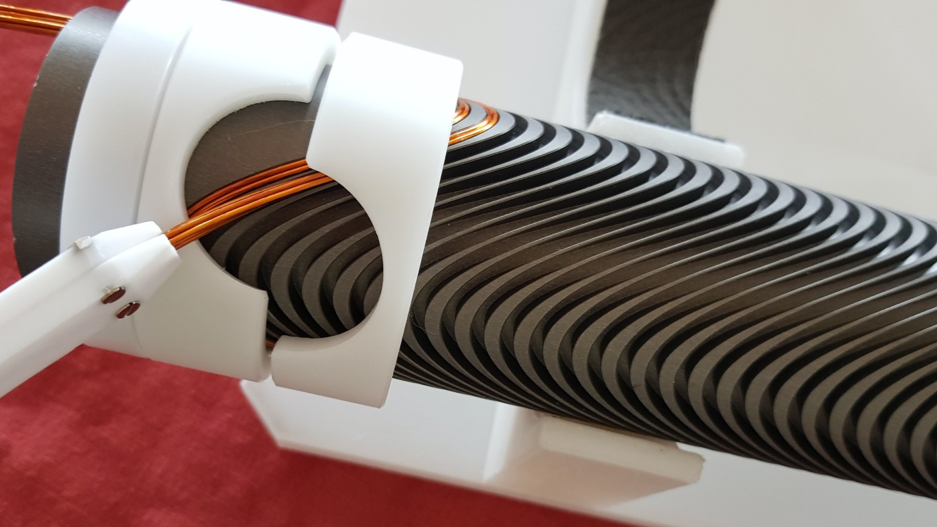 The elegant shapes of the inner layer of the FCC Final Focus Quadrupole prototype on the winding table. The groove is 2 mm wide and 4 mm deep. The sinusoidal shape with period half the circumference gives the magnet its quadrupole characteristics (image: Mike Koratzinos).

The final focus quadrupole (FFQ) project of a future lepton collider (FCC-ee), appeared a seemingly impossible task. FCC-ee is a very high luminosity collider; to attain this performance one needs to squeeze the beams as much as possible, and to achieve this, the last focusing element (the FFQ), needs to be as close to the interaction point as possible. The design calls for a distance between the tip of the quadrupole and the interaction point of 2.2m (by comparison, for the LHC, this distance is ten times higher). FCC detectors will be more than 10m long, so these machine elements are buried deep inside the detector. To make things worse, FCC-ee is designed with a small angle of 30mrad between the electron and positron beams, to avoid the interaction between electron and positron bunches. This necessitates two final focus quadrupoles sitting 66mm apart. The aperture of these magnets is 40mm, so there is only 13mm left for the conductor, the mechanical support and any eventual iron shielding, as the two quadrupoles should not interfere. Finally, the field quality of these magnets needs to be better than 10-4 and if possible closer to 10-5.

These requirements cannot be met by a traditional magnet design (forcibly a superconducting one, due to the high gradients required) and the only way out is to eliminate the iron shielding between the magnets. This, however, introduces substantial interference between the two magnets, orders of magnitude higher than the needed field precision. The way out is, of course, not to design two pure quadrupoles, but rather two magnets that are missing the field terms supplied by the other magnet in close proximity. There is only one design that can achieve this and it is called the canted cosine theta (CCT) design. A groove is cut in a cylindrical former with a complex, precise, shape that provides the correct mix of multipoles so that when the two magnets are put a specific distance apart, what we see along the axis of the beam is a pure quadrupole field.

Of course, all this works well on paper, but since the idea was never tested, a prototype had to be built. The first prototype to be designed, built and tested, was a single aperture design. And to test the idea of the twin aperture crosstalk elimination, one end of the prototype was constructed with another novel idea to cancel magnet imperfections locally, using the same mathematical model and apparatus as the crosstalk elimination software. The team also opted for another innovation: no human intervention was allowed in any stage of the project, to avoid the possibility of errors creeping in: the magnetic design created a computer file which was directly fed into the CAD program which in turn produced the file used by the CERN main workshop CNC machine to construct the formers.

The magnet was then wound with LHC-standard NbTi cable, assembled and tested at warm. The results justified the choices of the team and were excellent: multipole errors of 1.5E-5 or smaller. The corrected edge of the magnet also gave similar results. The team now eagerly awaits testing the magnet in cryogenic conditions.

The FCCIS project has received funding from the European Union’s Horizon 2020 Research and Innovation programme under Grant Agreement No 951754.

Enhancing the training of the next generation...