How many points to direct the particle beam to collision?

Developed specifically for the CERN Open Days, the activity aimed to explain the role of power converters in particle accelerators in a fun way. 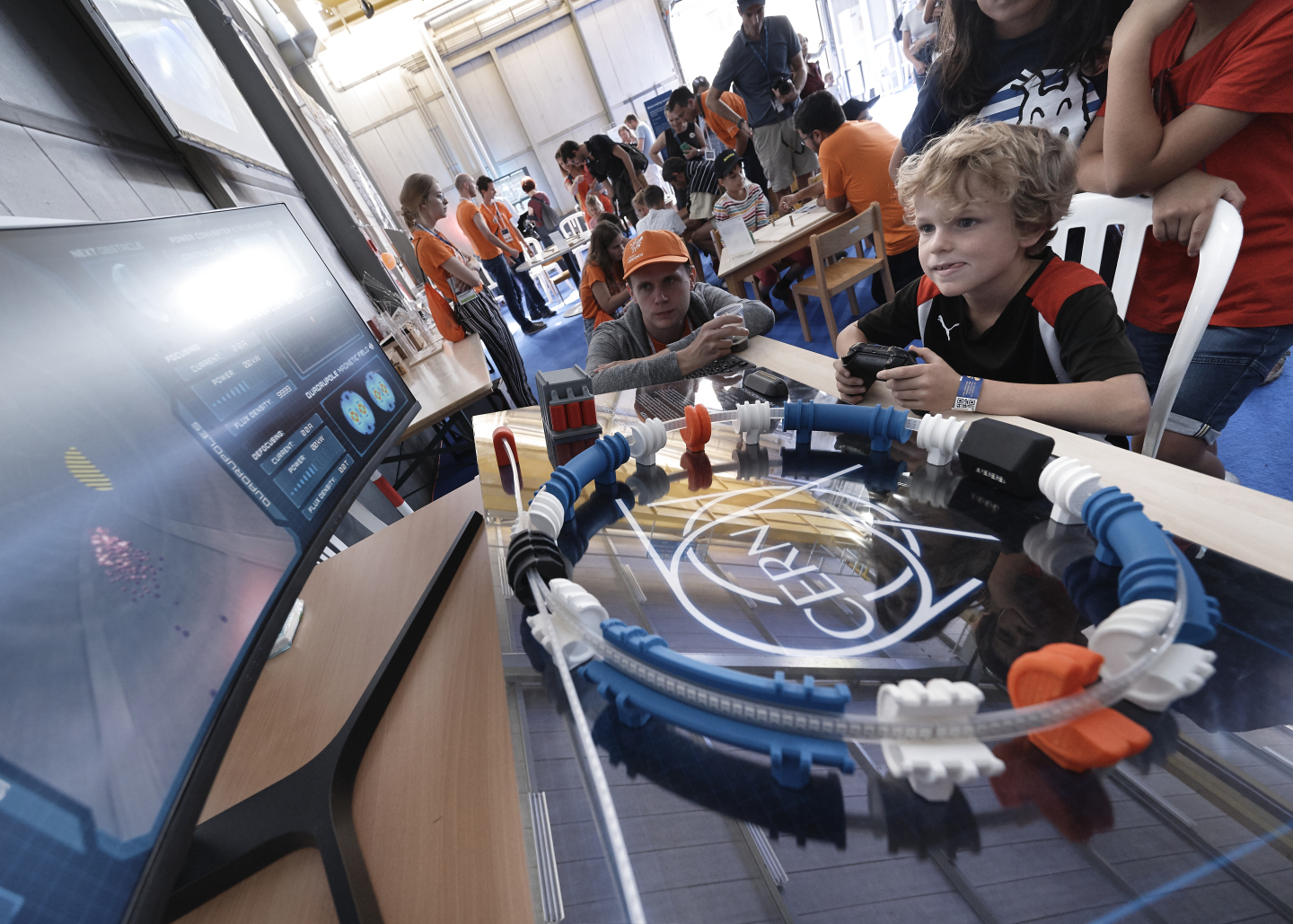 Players of all ages lined up to play the Accelerator Game during the CERN Open Days. (Image: CERN)

How many points does one get for directing the particle beam to the collision? Unfortunately, one gets no points for the big collisions in real accelerator like the Large Hadron Collider, only enormous amounts of data. But in the Accelerator Game things work a bit differently. Developed specifically for the CERN Open Days by the Electrical Power Converters Group at CERN, this interactive activity aimed to explain the role of power converters in particle accelerators in a fun and engaging way for visitors of all ages.

In particle accelerators like the Large Hadron Collider, particles are kept in a curved trajectory by magnets called dipoles, focused using magnets called quadrupoles, and accelerated in metallic chambers called radiofrequency (RF) cavities. All of these structures are electrically powered by hundreds of CERN-specific power converters. In the Accelerator Game, visitors needed to apply the right electrical pulse to make all these structures function properly. The game consisted of two distinctive parts: an arcade-like video game and a scaled-down model of an accelerator. The goal was to accelerate and guide a beam of particles, avoiding collisions with the accelerator pipe and obstacles – collimators. In real-life, collimators allow the deposition of beam losses in specific locations, minimising the radiation impact on the collider and detectors. “We took a few liberties to strike the perfect balance between realism and amusement,” explained Fulvio Boattini, the mastermind behind the idea for this activity. “And we would say, successfully so!”

If the beam collided with these obstacles, some particles in the beam would be lost. The player would interact with the game with two controller sticks for the two types of power converters: one powering dipoles and moving the beam on the horizontal and vertical plane, and the second powering quadrupoles, allowing the player to focus and defocus the beam and avoid the more difficult obstacles. As time progressed, the beam gained speed, accelerating the particles, and challenging the skills of the player.

If any particles remained after the one minute the game lasted, the player was rewarded with a stunning animation of two colliding beams and a final score. A scoreboard with the top ten players of the video-game was added to encourage some healthy competition among visitors and volunteers. “Each time the players managed to guide the beam through an obstacle, they got points equal to the product of velocity and number of particles they still had,” explains Dariusz.

The creation of this game was a joint effort by different sections of the EPC Group at CERN and the surprising contribution of two students from CERN’s High-School Students Internship Programme (HSSIP). The video-game itself was developed using the UNREAL engine by Christoph Merscher, with the collaboration of Dariusz Zielinski, who also designed the visually stunning animations and images, and Krzysztof Lebioda. “We started developing the game having almost no knowledge of the Unreal Engine. Every time we came up with a new challenge, we had to find out a solution, learning along the way. First, we were using block-based graphical programming, but soon we realized we had to write code in C++ to achieve the behaviour we wanted,” says Christoph.

To make the experience more tangible, Arnaud Bessonnat constructed a 1.2 meter scaled-down model of a circular collider, using 3D printing techniques. It included dipoles, quadrupoles, radiofrequency cavities, a detecting experiment and, of course, power converters. A LED strip around the accelerator simulated the two counter-rotating beams and the magnetic field. As particles gained speed, the LED beam rotated ever faster and the magnetic field glowed stronger. João Afonso wrote the code to switch each individual LED on and off in a predefined pattern, using an Arduino microcontroller. This program received instructions from the video-game through a communication protocol specifically designed for this purpose, and synchronised the LED beam with the progress of the player through the game. João based the program on the original work of two students from CERN’s High-School Students Internship Programme (HSSIP).

Over the CERN Open Days weekend, the Accelerator Game team estimate conservatively that about 600 visitors played the game. That is one player every two minutes, not counting all the visitors who stayed to watch and cheer the players as they tried to prove their worth, some coming back for multiple attempts at beating the highest score. “The reaction from the visitors is a clear sign that the hours we dedicated to this project paid off!” says Raul Murillo, the project supervisor for the game development, and the team agrees.

By all appraisals a successful exhibition, Raul attributes a great part of the activity’s success to the commitment and passion of the team. At a time when major developments are taking place for LINAC4 and ELENA in the context of LS2, Christoph, Dariusz, Arnaud, João and Krzysztof put a lot of effort in bringing the game to near perfection. “They were working weekends and after-hours to bring this game to a whole new level,” he says.

The CERN Open Days organisers have shown an interest in the Accelerator Game and would like to make it available to use in future events. For this, further development would be required, as the interactive game was designed to have the support of an Open Days volunteer, that is, the team would have to make the game more robust and low-maintenance, as well as provide instructing documentation. Hopefully one day the Accelerator Game might become a permanent activity for CERN visitors and the accelerator community.