From LEP to the FCC-ee, a great leap in precision

At the second EPOL workshop, the FCC-ee community looked at methods for determining energy with ever greater precision 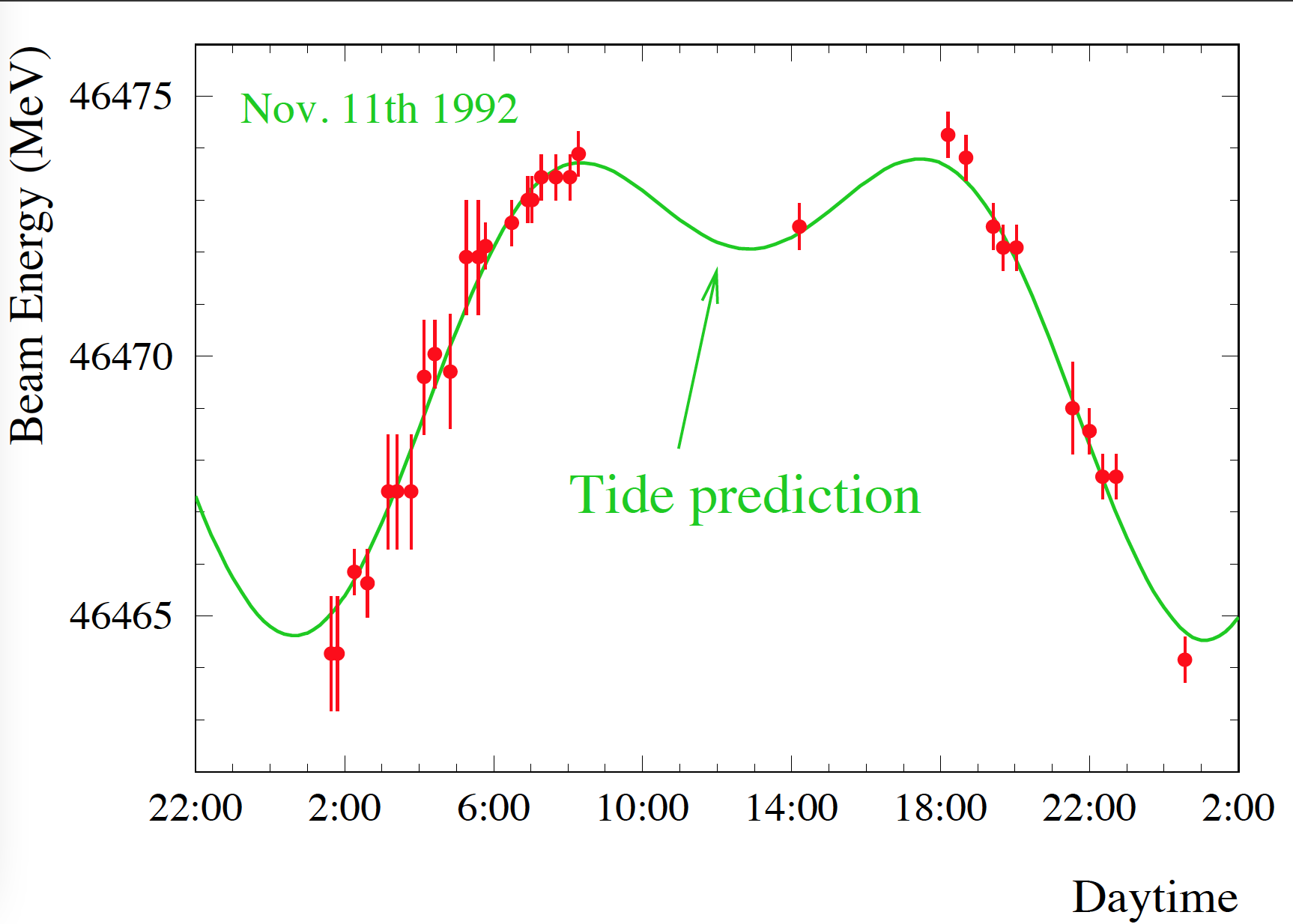 Evolution of the beam energy at LEP due to earth tides, showing the measurements from resonant depolarization (red points), and the predictions of a model. At FCC-ee, the earth tides, if uncorrected, will induce energy changes that are an order of magnitude larger.

The FCC-ee, a 91-km accelerator foreseen to begin operation at CERN in the 2040s, will deliver enormous samples of collision data at a wide range of energies, allowing for ultra-precise studies of many particles, including the Higgs, W and Z bosons, and the top quark. For example, when running at the Z resonance, the FCC-ee will produce as much data in the frame of one minute as that the LEP collider accumulated during its entire, decade-long period of operation. For this reason, unlocking the full potential of FCC-ee data will require exquisite systematic control at a level far beyond that achieved at previous colliders.

A beautiful and unique attribute of circular e+e- colliders is that the beams can naturally acquire transverse polarisation, and the precession frequency of the polarisation vector divided by the circulation frequency around the ring is directly proportional to the beam energy. This property allows the energy to be determined with very high precision through applying an oscillating magnetic field which, when in phase with the precession, depolarises the beams. This technique of “resonant depolarisation” underpins the precise knowledge of the mass and other properties of many particles that now serve as “standard candles”. A key example is the measurement of the mass and width of the Z boson, and associated electroweak observables, which was the major achievement of the LEP programme. FCC-ee offers the possibility of improving the precision of these measurements by a factor of around 500, a gigantic advance in precision that will allow for ultra-sensitive tests of the self-consistency of the Standard Model, and provide excellent sensitivity to new heavy particles that may affect the measurements through various types of quantum corrections or mixing.

Achieving the best possible knowledge of the collision energy is essential for accomplishing this programme, and was the focus of a two-week Energy Calibration, Polarisation and Mono-chromatisation (EPOL) workshop held at CERN from the 19-30 September, which was a follow-up to a first workshop that took place in 2017.

The workshop was attended by over 100 accelerator physicists, particle physicists and engineers from around the world, some remote and others participating in person. Presentations focused not only on the challenges at the FCC-ee, but also encompassed activities and initiatives at other facilities. The first week highlighted the plans for polarimetry measurements at the future Electron Ion Collider in the USA. Complementary projects were presented from SuperKEKB in Japan, where the accelerator is stress testing many aspects of the FCC-ee design, the Circular Electron Positron Collider (CEPC) in China and other machines around the world.

The collision-energy calibration is a central consideration in the design and proposed operation strategy of the FCC-ee, in contrast to LEP where it was essentially an afterthought. At LEP, resonant depolarization measurements were performed in dedicated calibration periods, a few times per year. At FCC-ee, these measurements will take place continually. This is essential, as a hard-learned lesson from LEP is that the beam energy is not constant, but varies throughout a fill, and also evolves over longer timescales. The gravitational pull of the Moon distorts the tunnel in “Earth tides”, and modifies the relative trajectory of the beam through the quadrupole magnets, leading to energy changes that at LEP were around 10 MeV over a few hours during Z running, but will be 20 times larger at FCC-ee. Seasonal changes in the water level of Lac Leman lead to similar effects. At FCC-ee, these distortions will be combatted by continuous adjustment of the radio-frequency (RF), as is now routinely done in the LHC. Additional challenges that were discussed in the workshop included the requirements on the laser polarimeters that will monitor the polarization levels of the e+ and e- beams, the shifts in collision energy that will occur at each interaction point through the combined effect of synchrotron radiation and the boost provided by the RF system, as well as spurious dispersions folded with collision offsets. Here the project will benefit from the considerable progress achieved since LEP in both the reliability and precision of beam position and dispersion measurements. A particular highlight of the discussions was an agreement that it will be feasible to perform resonant depolarisation measurements at higher energies for use in the determination of the mass of the W boson, which was not possible at LEP, allowing this important parameter of nature to be measured around a factor 20-40 times better than at present.

The workshop concluded with a list of future tasks to be tackled and open questions. These questions will be addressed as part of the ongoing FCC Feasibility Study, with updates planned for the Mid-Term Review, scheduled for the middle in 2023, and the Final Report in 2025

The meeting’s website with a list of participants, names of session organisers, slides and poster files is available here.

The workshop is supported by the FCCIS project, receiving funding from the European Union’s H2020 Framework Programme under grant agreement no. 951754